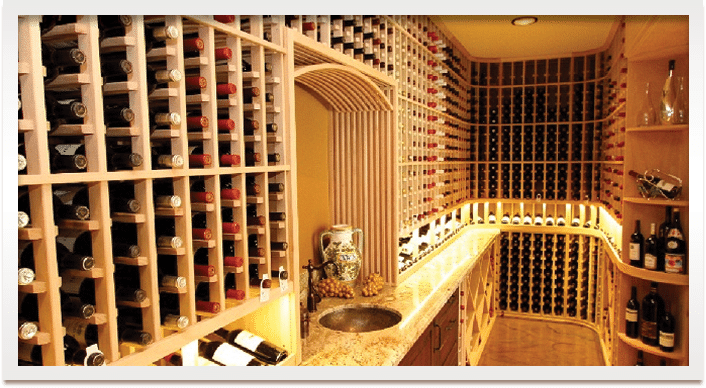 Jerry:  Leslie, do you have a timer or a dimmer switch for your lights?

Leslie:  They are all on slide dimmers.  All three:  the track lighting, recessed lighting, and I believe somewhere up here I have photos of that, but, yes, they are all on dimmer switches.  That’s the rack that was put together.  This bottle of Shiraz never fits in any standard racking and my friends always complain about Pax.  That other photo is a perfect example.

The minute I saw that bottle in the racking like that I went, “Holy heck!  If it fits this easily in the racking, it’s going to fit in the standard racking just

fine.” And of course it did, which is great.  It’s like slimming in there.  You would never know.  In fact, I sent the first photos to some friends and asked them to guess the type of bottle and they never guessed it was a bottle of Pax.

Tim:  And this is all the racking still?

Leslie:  Yes, it’s all the racking and a very impatient Leslie waiting for the racking to be put together.

Jerry:  Each individual component or most of the components were assembled in the garage and then brought into the wine room, correct?

Leslie:  Not only were they assembled in the garage, I don’t if I told you this, but we did a stream video feed of me putting together my custom wine racks because all my friends wanted to see how the racking project was going along and I said that it would be better for me to put it on video.  So I did a live video stream and at one point I had 30 people in the room actually watching me and the contractor’s son build the racking.

Jerry:  I participated on that one day.

Leslie:  Yes, and even when I put the wine in the cellar I still had more people that were demanding to watch me actually put bottles in the custom wine cellars Orange County, and I was like, “Okay.  If that’s what you want, here you go!”

Leslie:  What we did here was we took all the racking divided it up and sectioned it out.  We had a problem with the closet.  It was so funny because my contractor wouldn’t admit to me that he made a booboo.  I was out at a meeting and I come home and I my closet’s been bashed apart and I was like, “What happened to my closet?”  And he was, “I didn’t tell them about the right footer in the closet so the racking won’t fit.”  He bashed the right footer down and so that set us back a couple of days.  But it looks really pretty and clean now.  I kind of like it.  But I wish I was there to just hear him curse himself out when he realized that he made a booboo like that.

This was a fun photo because this was the first part of racking going in and that’s the main wall underneath the AC.  That’s double deep racking.  I was really excited at this point because the custom wine racks had a lot of pink in it and I was concerned that it would crash against the floor but the minute it got in there, I mean, this was like one of my happiest photos right there.  This is to show the booboo that we had with the racking, but that one right there is a great example of just how well that wood goes well with the flooring.

Tim:  So here it’s pink, but here it changed color.

Leslie:  Well, I think I put the flash on for Jerry because I wanted to show him.  Everything else was taken in its natural light.  Even with the lights fully on the pink completely goes away in the racking and I couldn’t have been more thrilled with how nicely this racking goes without flooring.

Tim:  That’s very interesting because it’s the wine cellar lighting and it’s the flash that’s making this look completely different.  In reality it looks more like that.  It’s amazing the impact the lighting makes.   It makes it look completely look different.

Leslie:  This has been someone who does a lot of work in photography.  The lighting in the home wine cellar is just so nice and it’s been a really